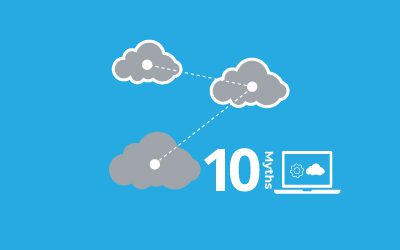 Major tech trends breed their own mythologies. This is certainly the case for cloud computing, which has been praised, vilified and hyped beyond reason in recent years. Cloud is the great savior of IT. It’s an IT job killer. It’s secure. It’s insecure. It’s a fad, and so on. As a provider of cloud computing advisory services and cloud ERP solutions, we felt it would be worthwhile to examine 10 of the biggest cloud myths and try to bring everyone back to earth.

For starters, the truth is that there is no “cloud.” Cloud computing comprises a broad collection of different technologies: compute, storage, networking, data management and more. And, it’s constantly changing. While some of the following myths may have once been at least partly true, the cloud has long evolved away from that point in time.

1. The cloud is only about money

In some use cases, the cloud saves you money. Other times, it is more expensive than the equivalent on-premises setup, though the month-to-month outlay may be lower. It’s not wise to assume you’ll always save money in the cloud. Rather, each cloud instance needs to be viewed as an investment of effort, money and time with a projected return (ROI).

2. It’s hard to audit the cloud

This is a popular myth in IT circles. Its adherents hold that cloud data cannot be audited as easily or fully as data stored on-premises. The latter can be held as physical evidence with a chain of custody. This may have once been true, but modern public cloud providers now provide sophisticated cloud forensics, audit and evidence preservation solutions. Auditors, for their part, have developed techniques to audit cloud systems and data.

3. The Cloud kills IT jobs

This is an understandable fear. As legacy systems migrate to the cloud, the people who supported them in the data center may not have as much work to do, at least on those old systems. However, as we all know, there’s seldom a shortage of tasks to complete in the IT department. Plus, the cloud does require in-house personnel. There is ongoing maintenance, but also the many new integrations and system extensions that the cloud makes so easy.

4. Being in the cloud means you’re good at IT

We sometimes see a phenomenon known as “cloud washing,” which involves making all things IT somehow cloud-based. It’s a good trick for getting budgets approved in certain organizations. However, as experienced IT people generally know, what’s good is good, and what isn’t… well… you’ve got a problem on your hands. Good tech means systems that are well thought-through, properly implemented and carefully maintained. Legacy systems that serve the business can absolutely fall into this category.

5. You need to do everything in the cloud

While the cloud can be transformative for some workloads, it’s not ideal for all. For sure, not everything can or should migrate to the cloud right away. A mature IT organization usually conducts a staged migration of systems to the cloud, leaving some in hybrid form. The process involves learning by doing, developing cloud management skills and moving forward from there.

An effective cloud strategy has to be based on clear business priorities and strategy. Having the CEO’s blessing to move to the cloud is great, but it’s not the same thing as having an actual plan. One thing we’ve seen, too, is that if the cloud strategy and plan are not well executed, the CEO isn’t going to be happy about it.

7. A single cloud vendor is all we need

This is a myth, though it does come true by accident at some companies. Modern cloud platforms are designed for inter-operation with on-premises infrastructure as well as with each other. However, given the skills required to be competent on, say, Amazon Web Services (AWS), a business that starts on AWS may become an “AWS shop” through entropy. There’s nothing wrong with this, but it doesn’t mean you have to restrict yourself to a single vendor.

8. The cloud is always more secure than legacy infrastructure

This myth is so prevalent today it’s almost hard to believe that the absolute opposite held mythic status just a few years ago. The cloud’s alleged insecurity was once the greatest barrier to its adoption. Then, as on-premises infrastructure suffered breach after breach, IT managers realized that the big cloud providers had more security than they could hope to achieve. That said, it’s always wise to pay attention to your responsibilities under the cloud’s standard two-tier security model. If you aren’t controlling access and user authentication, for example, you’ll be insecure in the cloud.

9. You won’t get locked in if you pursue a multi-cloud strategy

Wanting to avoid vendor lock-in is understandable. A multi-cloud approach can potentially help you stay away from being stuck on a single cloud platform. However, to work, this strategy requires a level of diligence that not all IT departments can muster. Someone has to manage the multi-cloud APIs. People have to master more than one platform—a task that can be pretty challenging when you’re dealing with a specific application stack in the cloud. It’s easy to fall into single cloud platform dependency.

10. Workloads are coming off the cloud

This myth is probably the result of wishful thinking from vendors who specialize in on-premises systems. The cloud is actually pretty sticky. Once a workload moves to the cloud, it usually stays. What is true, however, is that many solutions remain partly on-premises or linked to private cloud in hybrid architectures. This occurs when parts of a solution are rooted in technology that cannot make the move to the cloud.

To learn more about how your business can benefit from cloud computing, contact us for a free consultation.

Register For Our Newsletter

For the most current events & news, register for our newsletter.